A special anniversary Mass was held for Dolores today, 13th of January at 11am, at St Ailbe’s Church in Ballybricken, Limerick. It’s the first of two masses that will be celebrated marking the first year of her untimely passing, the next one to take place next Sunday 20th of January. Family, fans from all over the world and band members Mike and Noel Hogan and Fergal Lawler were there to pay their respects to Dolores, and to accompany Dolores’ family at such a difficult time. Prayers were offered up for Dolores’ children.

“We pray today for the repose of the soul of Dolores and we must also keep in our prayers Taylor, Molly and Dakota, Dolores’ children, for whom this time is also a difficult one. May the risen Christ continue to support them in their grief and in their lives,” said Fr James Walton, PP of Ballybricken and Bohermore who concelebrated the Mass with Brother Anthony Keane of Glenstal Abbey. At the chuch bell, this inscription could be seen, donated by Dolores’ children. 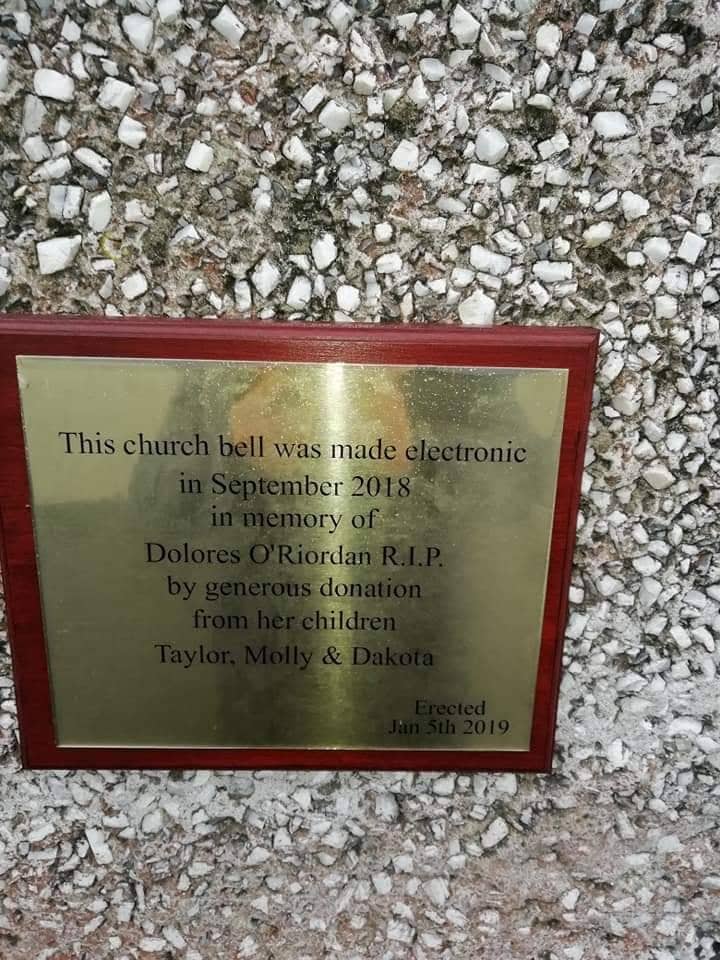 Dolores’ mother, Eileen O’Riordan, Dolores’ mother, Eileen O’Riordan, arrived early at the church. He brought daffodils, so symbolic of Ireland, so symbolic for fans of The Cranberries and so rare to see at this time of the year (daffodils are not usually seen until late February or early March). But there they were, fresh, beautiful and splendid today, January 13th, as if brought untimely by the hand of an angel to remind all of us mourning her with our torn broken hearts that thunder and lightning won’t change what we’re feeling, but the Daffodils looked lovely today.

She made sure everything was perfect for the anniversary Mass. Eileen is the Eucharistic Minister, reader, singer and sacristan at the church and she sang a number of hymns accompanied by Dolores’ niece Katie.

Fr Walton remarked that the parish of Ballybricken was the only one to have no village and no nameplate, and that it is difficult to find on a roadmap. Yet, “hundreds of people have been visiting this church to pray for Dolores and also making their way to Caherelly Cemetery, now a place of pilgrimage for her devoted fans, to pay their respects to her, and to leave there a memento of their visit.” Our princess’ graveside has become a musical shrine, decorated with all kinds of presents left by fans, including beautiful fresh flowers, guitars, stuffed animals, cards, photographs, and personal messages. Fr Walton described how Dolores’ life had brought “joy and solace and inspiration to the lives of so many people and continues to do so”. He explained how Dolores’ voice and her music was “a gift to her native county of Limerick and to the world.”

“Dolores was a force of nature. Her rise to stardom gave a huge amount of belief to young people at that time. It was reflected in the belief of the Limerick hurling team to win the All-Ireland final last year after 45 years. That belief can also be epitomised in the song Dreams, the unofficial anthem of Limerick hurling, in the words, And they’ll come true, Impossible not to do.”

“I know the past year has been tough for the O’Riordan family in coming to terms in dealing with the untimely death of a beloved daughter and beloved sister, of coming to the realisation that she is not coming back,” Fr Walton said.“And so, the words of another Cranberries song… ‘Hold on to love’…so hold onto your memories of Dolores, hold onto your beliefs and dreams as she did.” “Hold onto the inspiration, the joy, solace and empathy, that her voice, her music, and her life’s story has brought to so many.”

The anniversary Mass ended in a round of applause on the closing note of May the Road Rise to Meet You which was sung beautifully by Dolores’ niece Katie.